Daytona Bike Week is a motorcycle event and rally held annually in Daytona Beach, Florida. Approximately 500,000 people make their way to the rally area for the 10-day event. The festivities include motorcycle racing, concerts, parties, and street festivals. The event is usually held on the first full week of March (including the Fri-Sat-Sun prior to) and contends with the Sturgis Motorcycle Rally as the most popular motorcycle rally in the United States. It began as the Daytona 200 race on January 24, 1937. This first race was a 3.2 miles (5.1 km) beach and pavement course. It was won by Ed Kretz from California with an average speed of 73.34 mph (118.03 km/h).

This yearly race took a break from 1942 to 1947 due to World War II. During the years off, an unofficial event was still taking place commonly called Bike Week.

In 1947 the official race resumed and gained in popularity. The event was then promoted by "Big Bill" France, co-founder of NASCAR, and the family business (now known as International Speedway Corporation) still promotes the 200 and the entire Bike Week races at Daytona International Speedway, including the Daytona Supercross which is known for its world-class pyrotechnics and light show 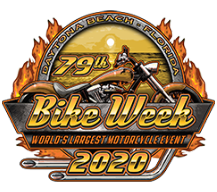 Back to previous page