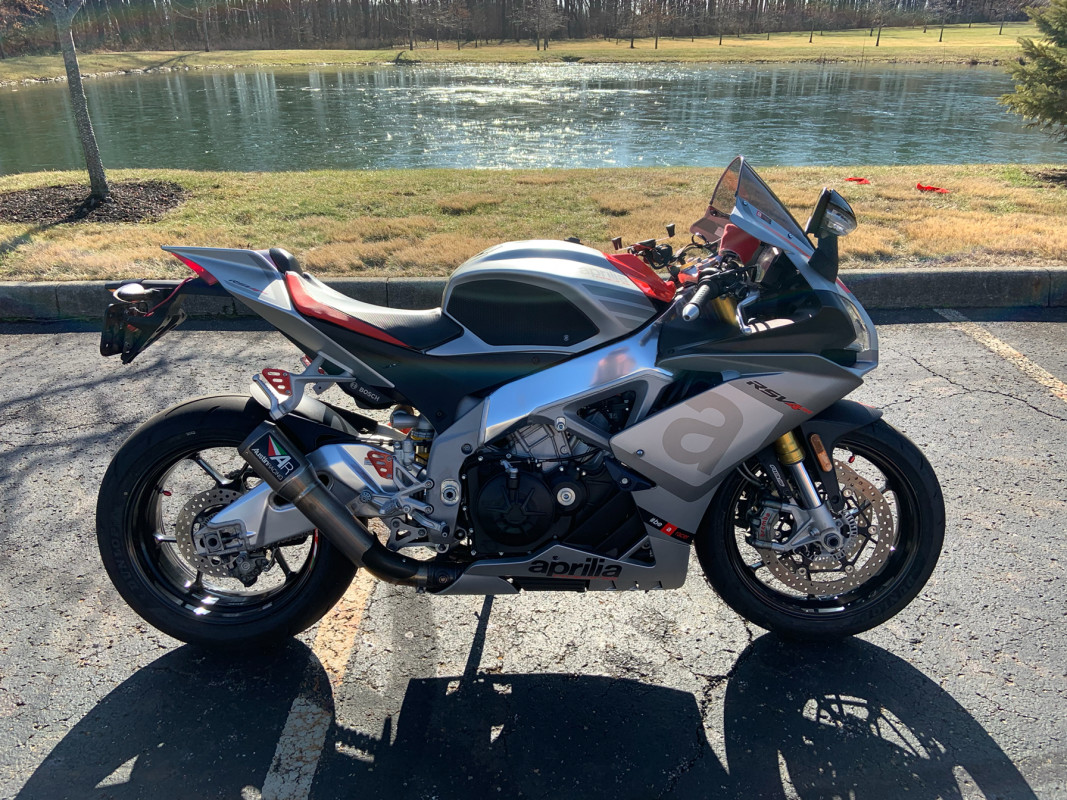 DESIGNED FOR RACERS BUILT FOR RIDERS

Evolution of a unique and victorious project

More than 200 hp, greater performance, lighter weight, more effective on the track and new riding pleasure on the road, with the best possible technology provided by the advanced aprc and race abs electronic controls. titles.

VERSIONS AND COLORS: Aprilia RSV4 RR represents a top shelf technical platform, ready to provide the rider with a “race replica” performance and feeling. As standard equipment it also has all of those features which only the Factory version RSV4 had previously, such as magnesium external housings, oil sump and head covers, a wide range of chassis adjustments and the variable setting intake ducts. Aprilia RSV4 RR is available in two attractive color schemes, both matte, on a black and grey base (Bucine gray and black Ascari) and a “Race Pack” is also available that includes lightweight forged aluminium wheel rims and more sophisticated Öhlins suspension (shock absorbers, fork and steering damper).

V4 65°; INCOMPARABLE ENGINE: Starting from the top, the 65° V4 has a new air box with filtering elements perpendicular to the air flow, studied with sophisticated CFD (Computational Fluid Dynamics) systems in order to minimise load losses and maximum pressure in the intake ducts. The upper injectors are new, whereas the variable setting intake ducts were redesigned to the benefit of an even wider range of management in terms of their travel. As with previous models, each bank has a dedicated servo unit actuating the two throttle bodies of that bank only. This means that the aperture of the throttle valves and consequently the quantity of fuel injected can be controlled independently. This is a never before used solution in a production bike that opens up practically infinite possibilities for power delivery control and works hand in hand with the APRC system. In order to improve the fluid dynamic performance, the heads were redesigned with intake and output ducts that have new geometries and contouring on the ends machined by a numerically controlled tool. The combustion chambers are no longer obtained through a fusion process but by a finer mechanical process which is also numerically controlled. In order to improve reliability and precision under extreme loads the height of the valve seat seals was increased and the relative lubrication reservoir was modified. The heads now have a triple layer of gaskets. The timing system confirms the innovative mixed chain and gear kinematics of the Aprilia V4 (with the chain camshaft driving only the intake camshaft, which in turn drives the exhaust camshaft via a gear) which allows for extremely compact heads especially in the area beneath the frame spars, much narrower than would otherwise be possible. In order to increase the maximum rotation speed a painstaking study was conducted on lightening the parts in motion of the elements included in the heads. All four valves are now in precious and lightweight titanium (the intake valves are oversized at 33 mm); the valve springs are completely new, the intake valve springs are made with oval section wire whereas the relative tappets and caps were lightened. The camshafts have a brand new profile and were lightened by a whole 500 grams. Moving downward, the crankshaft now has connecting rod pins reduced to 36 mm in diameter, while the Pankl connecting rods are lighter by a total of 400 grams. As in previous models, the monobloc crankcase with integrated aluminium cylinder liners ensures maximum rigidity and consistent performance. The upper half of the engine case is now made with a new shell fusion and has been lightened and reinforced; it also now has an optimized ventilation system in order to reduce power loss due to air pressure inside the engine crankcase. The lubrication system has also been redesigned. A brand new oil sump ensures increased draught no matter what position the engine is in (for example in the most extreme leans or in maximum acceleration / deceleration conditions) despire the oil level being decreased inorder to decrease friction. The "rose pipe" is also new (oil pump intake line), now equipped with a new overpressure valve and thinner mesh filter. The piston cooling oil nozzles were also replaced and the gearbox now has a valve regulated direct hydraulic lubrication circuit. The latter uses lightened primary drive gears ad takes advantage of new ratios which have been optimised to fully exploit the increased engine power. The entire exhaust system has also been completely redesigned with revamped electronic valve management, now equipped with two oxygen sensors (one per bank), while a new, more powerful ECU contributes to more precise management of the engine in the area of maximum rotation achievable.

SUPERBIKE FRAME: Aprilia is known as one of the best chassis manufacturers in the world and the RSV4 RR represents the synthesis of the technical prowess Aprilia has acquired in top level world championships. A particularity which is still exclusive to the RSV4 RR (and which has always been a characteristic of the previous generation RSV4 models) is the exceptional – and exclusive – possibility of adjustments that the standard equipment chassis is able to offer. In fact, the new Aprilia is the only superbike that allows the rider to adjust the engine position in the frame, the headstock angle, the swingarm pivot and the rear end height, naturally in addition to the fully adjustable suspension. Just like a real racing bike. The highly sought after and winning structure of the Aprilia RSV4 frame has remained substantially unchanged and uses elements in pressed and cast aluminium capable of guaranteeing exceptional performance, thanks in part to the perfectly balanced torsional rigidity and flexibility values. Optimallycentralised masses are just one of the RSV4 chassis strengths. To achieve this result nothing was neglected. The swingarm the same construction technology as the frame but it has been lengthened 14 mm to guarantee better traction and to decrease the tendency for wheelies during the violent acceleration that the new extraordinary characteristics of the powerplant allow. Precisely because of the V4's significant power increase the chassis and weight distribution configuration have been revamped: the engine is mounted in the lowest possible position allowed by its adjustment range within the frame, whereas the fully adjustable suspension has been fine tuned to guarantee maximum control in extreme riding.

A NEW ERA: Aprilia RSV4 RR represents the most important and profound advancement ever made on this extraordinary model. A development that even involved the design. The style of the new RSV4 is the result of the perfect combination of form and function. The careful design led to the creation of the most compact full size sport bike on the market, where technical elements such as the impeccable aluminium double rail frame contribute to emphasising its racing vocation. The front end has been completely redesigned: now there is a new, more protective top fairing, created after a careful wind tunnel aerodynamics study, which provides better protection from the wind for riders of any height. This choice has a positive impact not only on the track when the rider is seeking protection to achieve maximum speed, but also on the road where greater comfort is provided thanks to the lower air pressure on the body and helmet. The characteristic triple headlight is also new, now with a more modern shape and an LED parking light. The mirrors are new, also the subject of a wind tunnel study, which combine excellent aerodynamic penetration with improved visibility and built in LED turn indicators.

ADVANCED APRC: Aprilia RSV4 RR perfects what was already top shelf in the previous versions thanks to a significant improvement to its already exceptional dynamic controls package designed and patented by Aprilia. APRC(Aprilia Performance Ride Control) is the well-known control systems package derived directly from the winning technology in the World Superbike championship, the most complete of its kind available on the market today. On the RSV4 RR, APRC has been further developed to adjust even better to the new engine and chassis characteristics in order to meet the specific needs of the pleasure or professional rider. The new APRC system integrates even better with the full Ride-by-Wire multimap precision electronic management of the Aprilia V4. APRC, which comes as standard equipment on the Aprilia RSV4 RR, includes: 1. ATC: Aprilia Traction Control, adjustable on the fly (without having to release the throttle) to 8 settings thanks to a practical joystick on the left side of the handlebar, with extremely fine tuned operating logic. 2. AWC: Aprilia Wheelie Control, adjustable to three settings, has been recalibrated for maximum performance at level 1 (the least restrictive setting). 3. ALC: Aprilia Launch Control, the assisted starting system for use on the track only with 3 settings. 4. AQS: Aprilia Quick Shift electronic gearbox for ultra-fast shifting without closing the throttle or using the clutch. In addition to the second generation APRC system, RSV4 RR comes from the factory standard with the highly advanced “Race ABS” antilock braking system, designed and developed by Aprilia in collaboration with Bosch to guarantee not only extreme safety on the road, but also the best possible performance on the track. The 9MP ABS unit is top of the line in currently available refinements and technology: the system, which weighs only 2 kg, can be disengaged and is adjustable to 3 settings by easily accessing the control menu on the sophisticated instrument cluster: Level 1: this is dedicated to trackuse (but it is also approved for street use) and acts on both wheels to guarantee the best possible performance, even in the most intense braking conditions at any speed. It takes nothing away from the pleasure and performance of “extreme” riding. Level 2: this is dedicated to sportriding on the road, acts on both wheels and is combined with an advanced tip over system (RLM - Rear Lift-up Mitigation) which engages progressively based on the vehicle speed. Level 3: this is dedicated to riding on surfaces with poor grip, acts on both wheels and is combined with the tip over system. Each of the 3 setting levels for Race ABS can be combined with any one of the 3 new engine maps to allow riders with varying experience and skill levels to find the best possible combination. The new and powerful engine ECU now allows the three maps to be more easily managed, each one of which corresponds to a different engine power output and now also to a dedicated engine brake management map. The two classic engine management logics Track and Sport are now joined by the new Race map, the most extreme and suited for professional use of the bike on the track with engine braking control reduced to a minimum in order to support more abrupt braking. All three maps are more manageable and less aggressive than the previous version, therefore allowing perfect correlation between throttle control and the torque sent to the wheels. This reduces rear tire wear and makes it possible to better manage the power that the Aprilia V4 is able to develop.